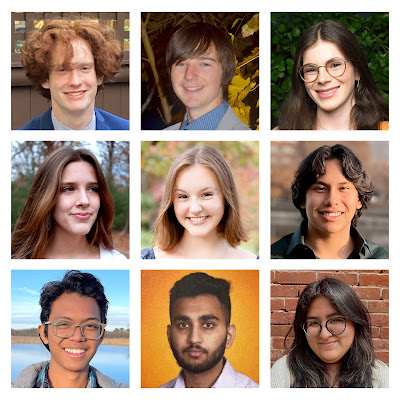 The Somerville Mathematics Fund is pleased to announce the winners of their renewable mathematics scholarships for 2022.  The Math Fund was founded to celebrate and encourage math achievement and these students deserve to be celebrated for their work in math and science while in high school. Thanks to the generosity of many individuals and a few organizations, this year we were able to award a record 9 scholarships, totaling $54,000 over four years.

Due to a COVID-19 outbreak at the high school during awards week, we were unable to personally award the scholarships at the awards night for a third year.  The school handed the students a certificate which named their scholarship, then the President of the Somerville Math Fund or the donor of their scholarship called each of them to tell them about their award and that a letter was in the mail with more details.

We definitely want to celebrate our scholarship winners for their achievements while meeting the challenges of going to high school, much of it was during a pandemic. CONGRATULATIONS.

A bit of explanation about the scholarship names.  Some scholarships are supported by many donations, some large, some small — but together there is $6000 for each student.  For those student who participated in Game Jam this year, we had sponsors who each sponsored one year of a scholarship.  We have some named annual scholarships, two memorial scholarships are for founders of the Somerville Math Fund.  One of our named scholarships is given by one of our first scholarship winners back in 2001 in the name of his favorite famous mathematician.  One is given in memory of a mother who distinguished herself in WW2 as a nurse and saved for her children’s education. 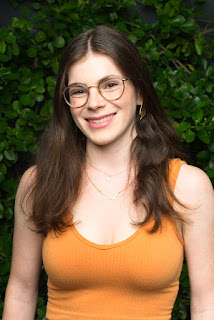 One of the scholarships was given in the memory of an outstanding woman mathematician, Dr. Alice T. Schafer.  Lucy Gunther was awarded the Alice T. Schafer Memorial Scholarship, she is planning on majoring Mechanical Engineering at Carnegie Mellon.

Less known about Dr. Schafer was her role helping to start the Somerville Mathematics Fund in 2000 -- attending all of the planning meetings and contributing to their work as long as she was able.  She is remembered for her passion and work to insure mathematical opportunities for women. Lucy sees herself as someone with the mind-set to solve practical problems for the society, be it solving packaging or mobility problems, she realized this was the mindset of an engineer.  Since Dr. Schafer was committed to the education and supporting women in mathematics, Lucy’s majoring in Mechanical Engineering is a wonderful way to honor Dr. Alice Schafer's memory of encouraging women in the maths and sciences. 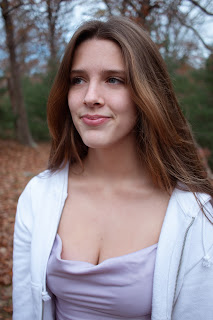 The Lt. Catherine M. Landers Memorial Scholarship was awarded to Rio Hunter Black.  Rio has an interest in medical research.  When Lt. Landers (1920 - 2012) wanted to go to nursing school (graduating in 1942), her grandmother opened a cedar chest were she had been saving dollar bills to help pay for her granddaughter’s education.  Lt Landers won a Bronze Star for her service during WW2, where she ran a field hospital outside Paris; she was about to be shipped to the far East when WW2 ended and so she boarded a transport ship for the USA instead.   Jay Landers and Jasper Lawson donated a scholarship in her memory, honoring her commitment to education. Rio Hunter Black's interest in medical research with a Biology major at Tufts is a wonderful way to honor Lt. Landers' commitment to education. 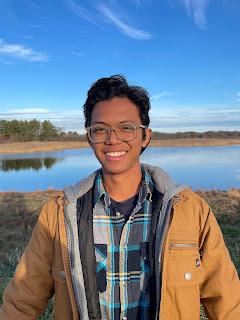 Our scholarship in the memory of S. Ramanujan, it is a gift from the Jha Family and is awarded to Iskandar Nazhar who is planning on attending  UMass Amherst.  Iskandar Nazhar wants a career in pure math.  Srinivasa Ramanujan (1887 - 1920) was a mostly self-taught brilliant Indian mathematician who sadly died young.  He discovered his love of mathematics while in high school when he found a book that listed 4000 mathematical theorems without information on they were discovered or developed. So he continued his math work, often on a slate, only recording his concluding theorem on paper when finished, without the details of how he came to the conclusion.  With his humble beginnings and no formal mathematical training, the story of his life and how he finally connected with the well-known mathematicians of his day is detailed the book and movie, The Man Who Knew Infinity. That book inspired the Jha family who gave this scholarship in his honor. Ramanujan’s notebooks and papers have included both previously discovered and new mathematical theorems many in number theory.  These notebooks have continued to provide mathematicians with material to study and try to figure out how Ramanujan discovered these theorems and to see if they were provable.

Iskandar’s love of  and talent for math led him to taking many college math classes while still in high school.  He already had S. Ramanujan as one of his heroes.  A perfect match with the sponsor of this scholarship who also was inspired by S. Ramanujan as a high school student more than twenty years ago. 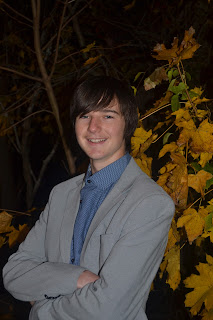 The Michael Voolich Memorial Scholarship was awarded to Samuel Diener who is interested majoring in Physics at Case Western Reserve.  Michael Voolich (1943 - 2019) was a person who was interested in how everything worked, if Renaissance man was a job offering, Michael would have applied. He learned by asking questions and then he loved telling everyone what he had learned and how seemingly disparate things were related.  He had a career than included teaching many different subjects in local schools, none of which was math. But, he married a math teacher.  So, when the Somerville Math Fund was being discussed and organized in his living room, of course he joined the founding board.

Michael loved to be able to give and help others in the local community along with his extended family here and abroad. This scholarship was funded by the many people who donated in his memory to the Somerville Math Fund.  Sam participated in Scrapheap before it was canceled due to COVID the last couple of years. Sam’s interest in helping the community and solving problems would definitely be much that Michael would have loved to have talked about with Sam. 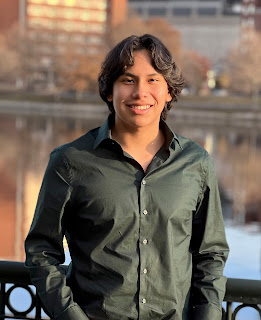 The Somerville Math Fund Scholarship generously donated by Neva Durand went to Ian Morales. “Congratulations on your well-deserved success. You should be very proud of what you’ve accomplished.” Ian will be attending Carnegie Mellon to major in Mechanical Engineering. He has an interest in using engineering to solve real world problems with clean energy and water and then finding a way to give back to other first generation students in Somerville. 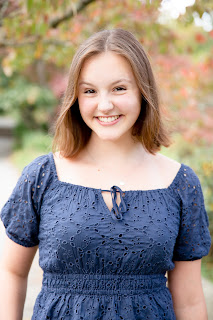 The Somerville Math Fund Scholarship, generously sponsored by four sponsors of Game Jam #2 was won by Katherine Johnson.  Our annual high school engineering competition, Scrapheap Showdown, was canceled again by COVID in  October 2021.  In lieu of the live event, usually in a gym at Tufts University, we held an online Game Jam where students created games for others to play and evaluate.   The four donors who each paid for one year of Katherine’s scholarship were Julie Schneider, the Bickoff Family, Winter Hill Bank, and Tufts University.  Kate has been involved in projects and activities around wellness while in school.  She sees mathematics (data interpretation, quantitative reasoning, and statistical analysis) as a way to improve societal health.  So, Kate is planning on attending the University of Virginia to major in Public Health. 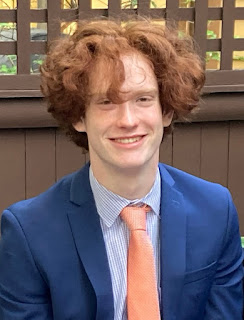 The Somerville Math Fund Scholarship partially sponsored by East Cambridge Savings Bank, and the other half by generous donors to the Somerville Math Fund was won by Ezra Brody.   Ezra has an interest in the life of microorganisms and the process of novel drug development. With my desire for a career focused on the ethical medical applications of biochemistry, I want to also investigate pharmacology and the body’s response to diseases and treatments.  Ezra plans to attend Rensselaer Polytechnic Institute, and major in Biochemistry and Biophysics.

The Somerville Math Fund is able to award scholarships and teacher grants thanks to the generosity of our donors.  We have some who are able to make large donations, but some who can only make small ones. All of those donations together made it possible to award two more scholarships, one to Nikhilesh Rattan and the other to Leensyn Rivera Asmen. 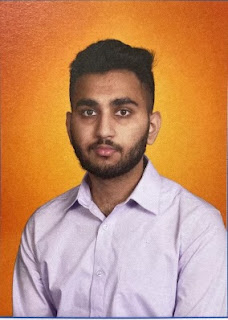 Nikhilesh Rattan is interested in space technology and plans on majoring in Mechanical Engineering at  Tufts University. 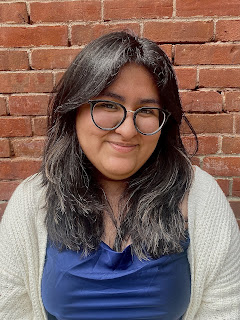 Leensyn Rivera Asmen is interested in climate justice and sustainability and plans on majoring in Environmental Science and Computer Science at Simmons University.

The Somerville Mathematics Fund was chartered in 2000 to celebrate and encourage achievement in mathematics in the city of Somerville, Massachusetts. It May 2011, it was recognized as the outstanding Dollars for Scholars Chapter in New England.  Since it's founding in 2000, it has awarded $554,000 in four-year mathematics scholarships to one hundred eighteen outstanding Somerville students.

The link to this page is https://somervillemathematics.blogspot.com/2022/06/outstanding-math-students-win.html

Have a Great Idea on How to Teach Math? These Teachers Do!

Many teachers have great ideas on how to make their classrooms a better place for their students to learn math.  The teachers’ ideas frequently outrun the budget schools have for supplies and their own ability to subsidize their classroom.  The Somerville Mathematics Fund tries to fill this need through the generosity of their donors.

This year and last have been unusual school years.  The Somerville Public School buildings were closed in early March 2020.  Schools finally reopened for most students in the last week of April 2021.  The students have been back in school this year, with pandemic precautions in place —it is not a “normal school year” like “back in the old days” pre-COVID.  The classroom teachers and students have had to adapt to new routines and expectations.

In early April, the fund will be seeking applications from students who reside in Somerville for college mathematics scholarships.  Over twenty-one years, the Somerville Math Fund has awarded a total of $505,000 in four-year mathematics scholarships to one hundred nine students.  Links to the scholarship application form is available at  www.somervillemathematicsfund.org   For more information, to volunteer or to make a tax-deductible contribution, please contact Erica Voolich (617-666-0666 or mathfund@gmail.com).