Math Nights and Afternoons here, there and everywhere!

One of my dreams when I started the Somerville Mathematics Fund eleven years ago was to see children excited about math and doing math activities together and with their parents.  The Somerville Math Fund is an affiliate of Dollars for Scholars and so clearly we are a scholarship organization.  However, long before high school, children need to be getting ready for those scholarships and so it is important for kids to learn to think mathematically.

In each of the descriptions below, I have linked the newspaper coverage to the school's name -- go read all about the fun that was had and what students were learning.  As other articles are published, I will update this with links.

For all of these events, the Bickoff family has generously donated pizza.  This had made it possible for families to come to school for a wonderful event with their children even though they tend to conflict with dinner time.

At the end of evening of the K-6th math nights, families go home with activities and materials they use together at home.  The math fund grants pay for these materials along with the "math prizes" at some and the games students play at the events.

I have been visiting math fund funded events all over the city.  The first one was at West Somerville Neighborhood School in February.  After pizza was eaten, the tables were cleared and set up.  This K-6th event had different games and activities by grade but students could try other tables after completing their own activities.  Usually math nights start in the spring but our unusually warm winter allowed this fun night with no snow or ice challenges.

The next math night was the K-2nd Argenziano School math night.  This is Agenziano's first year winning a Somerville Mathematics Fund grant for math nights and the teachers ran it as if they had been doing this for years.  They had a wonderfully exciting math night.


While a pizza dinner was served on one side of the room, the other side had active math activities led by sixth graders and math games led by teachers.  Once people had eaten, the rest of the cafeteria was setup for games and activities by grade level.  There were many excited intensely involved students along with their parents.


Later in that same week, middle school students from Healey, Brown, East Somerville Community School at Cummings and West Somerville Neighborhood School celebrated Pi Night at the Healey School.  I coplanned this π event with Wil Jacques, Jack O'Keefe, Theresa MacVicar, Annette Fiori Bassett and Scott Walker. Not only did we have pizza but Table Talk Pies donated large pies for prizes and small pies for everyone. We had community volunteers and wonderful high school students help with each activity.

Some activities collected data, some were estimation, other made things.  Always popular is to make are the π Buttons.  Students also made line drawings that produced various curves, circles, nephroids and cardioids.  Students always love the estimating activities.  These included estimating the sizes of circular things around the room, the number of round objects in a jar, estimating by feel and even estimating how far one and a half revolutions of a bike tire will end up.  The data collecting includes comparing targets and collecting tooth pick drops to calculate π (Buffon's Needle problem).  Some students even shared their rap about π.


April has brought four more events.  The first at Winter Hill, then Argenziano and finally two at East Somerville Community School at Edgerly on consecutive days. 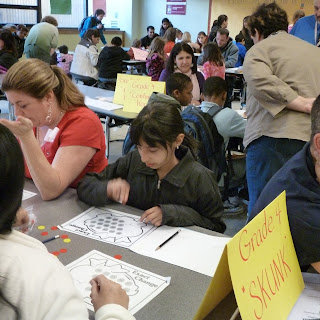 The 3rd - 5th Math Night at Winter Hill started with pizza and then the cafeteria tables were cleared for the activities.  Tables were devoted to particular grade levels where students and parents played games together that are related to the classroom curriculum and some others that they can play at home.  There were also games for all levels at one end of the room, a graph collecting data from everyone at the other end, and estimation jars along the side.
The 3rd - 5th Argenziano math night followed the same format as their earlier math night, except this time the grade level for the activities and challenge level of the games changed.

I watched a wonderful moment where a mother and daughter were playing Mankalla and teaching a teacher a variation on the game that they play at home (they block off part of the holes and this makes the game a different strategy challenge). 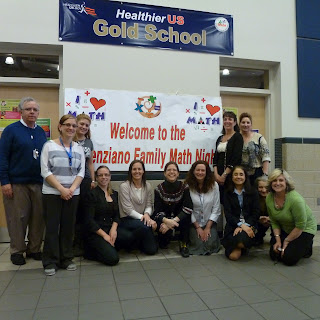 Yesterday,  I went to the East Somerville Community School (ESCS) at Edgerly's math event for 2nd-4th.  This year they expanded it to include 2nd grade.  The format is a bit different at ESCS in that they start with the math activity right after school and end with the pizza.  Again, they had games and activities in various rooms, with individual halls devoted to each grade.

Every year, the ESCS math night includes a time for parents to learn something about how math is taught and what they can do to help their children at home,


One of the activities had 2 students release 2 cars down a ramp at the same time.  Then they had to estimate the distance the car traveled before they could measure it.


The math night at ESCS yesterday was followed by 3rd grade Test Success Day today.  Since the students have never taken MCAS exams prior to 3rd grade, they came to school today to take a practice test (last year's math exam) with either a parent or with a 7th or 8th grader. 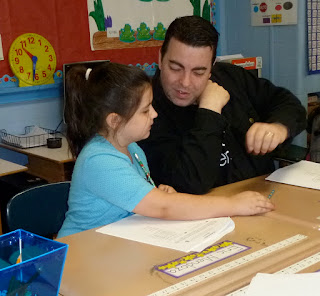 They started with breakfast, ran around in the gym and then tried the sample test while talking through the problems as they did them.  After the test, they learned the new games their parents learned while they were in the gym and then ended with a pizza lunch, and left with gift bags of math supplies.

The session for the parents included information on testing and gave them some math activities they can do at home to help their students. 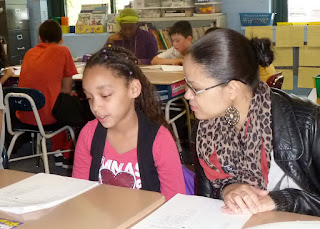 This is not the end of the math nights for this year.  Stay tuned to learn about Winter Hill's K-2nd math night and Healey's K-2nd in May and June.  If you have never had the fun of volunteering at a math night, contact me at mathfund@gmail.com to get details about the Healey School Math Night.


©2012, Erica Dakin Voolich
The link for this page is: http://somervillemathematics.blogspot.com/2012/04/math-nights-and-afternoons-here-there.html
Posted by Erica at 10:05 PM No comments:

Last weekend I was in DC for the Circle on the Road conference on Math Circles.  I loved the activities that I saw and participated in -- they challenged students to think about, struggle with, and solve interesting math problems in a group setting.  The ones I saw were a great way to help students become mathematical thinkers and problem solvers.

I had the wonderful opportunity to speak about the activities that The Somerville Mathematics Fund uses in our Scrapheap Showdown.  It was nice to hear that others were interested in what we are able to do in our annual engineering challenge for Somerville high school students.  If you haven't read about our adventures, scroll down in this blog to past posts or go to our post about Jamming in the Junkyard.  I always love to share what we do and offer to work with and share ideas with others who want to try this in their own communities.  It was nice to have suggestions from others on where we might get inspiration for designing our problems.

I was invited to speak on Friday, but stayed for the whole conference.  I benefitted from others sharing their ideas from their own work with math circles, some with various ages of children and some with teachers.  Following my talk was a math challenge using the Euclidean Algorithm for GCD that we all participated in.  Then a panel of students who have had experience leading Math Circles.

Saturday they held a math fair at the Ridley Center at the Smithsonian.  There were games and puzzles lining the hallway.  In the classrooms were hour-long age-identified activities/lessons from math circles.  I went to one which took the classic Knights & Liers logic puzzles and brought them down to a level that elementary children were solving them.   I assisted with a Blue Eyed Island logic problems session -- another nice way to act out logic problems for elementary children.

Sunday was more discussions and panels sharing opportunities for children and teachers, math summer opportunities and information on evaluation of math circles.  It ended with Dr Gordon Hamilton sharing his wonderful challenging activities for children of all ages based on some of the unsolved mathematical problems.  He has a website, the Math Pickle where he shares his materials.

There are some exciting things happening in Math Circles around the country and if you'd like to find one, check out the website list.  The talks from the conference are going to be posted on the conference website.  Check back there later to see for yourself.

I am pleased that there is a math circle at Tufts for Somerville students.  I understand there is another one in Somerville, possibly at the Argenziano School, but I have not been able to confirm this or find out how to contact the person who is running it.
Posted by Erica at 1:52 PM No comments: