Time for Somerville Teachers to Get Together Their Grant Applications

The maximum amount of any grant is $500 per year.  Previous winners are welcome to apply again as long as they have completed their report on the previous grant.  You can read about last year’s grant winners on the Somerville Mathematics Blog or by requesting a copy of this year’s annual newsletter to be mailed in early December.

In early April, the fund will be seeking applications from students who reside in Somerville for college mathematics scholarships.  The application will be available on
http://somervillemath.dollarsforscholars.org and www.somervillemathematicsfund.org.  For more information, to volunteer or to make a tax-deductible contribution, please contact Erica (617-666-0666 or mathfund@gmail.com)

The link to this post is: http://somervillemathematics.blogspot.com/2013/11/time-for-somerville-teachers-to-get.html
©2013 Erica Dakin Voolich
Posted by Erica at 4:06 PM No comments: 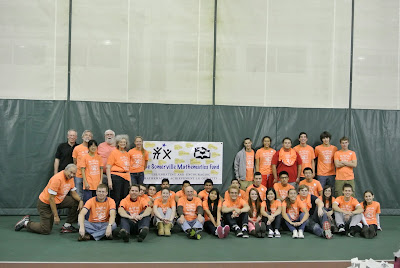 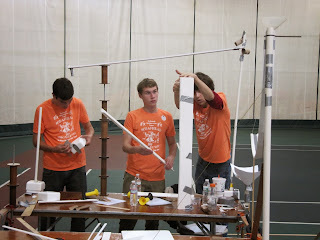 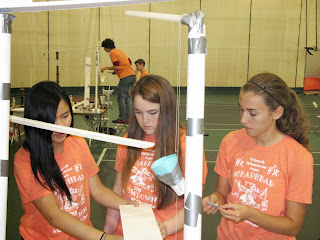 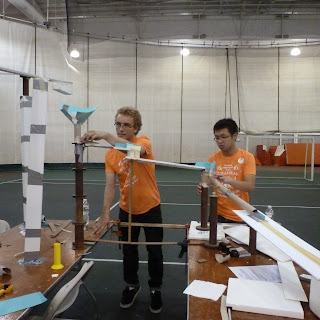 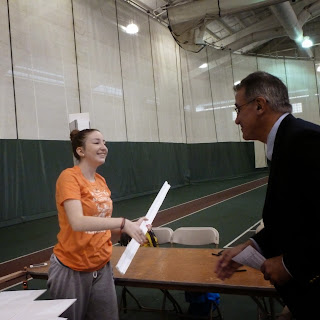 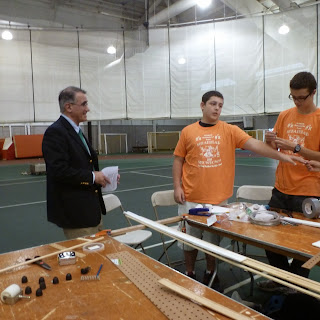 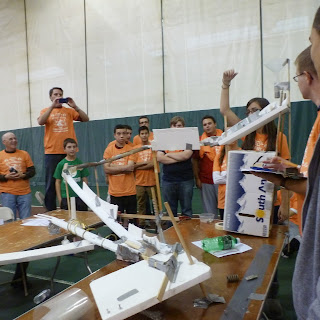 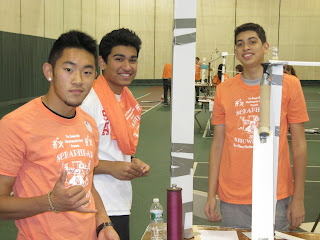 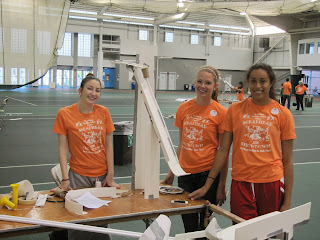 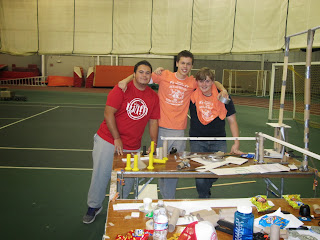 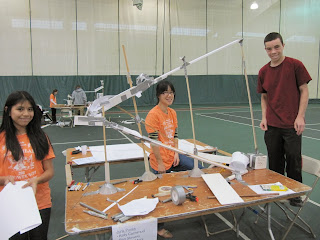 The Somerville Mathematics Fund offers it's annual high school engineering challenge in October.
The deadline to register is October 10.  The competition is on October 20th in "The Cage" at Tufts University.  To download the registration form, go to Somervillemathematicsfund.org.

Competitors must be high school students who are residents of Somerville MA to participate.  Students choose their 3-person team in advance, arrive on the day of the competition, ready to learn what their challenge is and to compete for wonderful prizes.  Prior to the event, students must register by October 10 and to fund raise to support their team.  There is a minimum $75 total per/team to raise and the best single fundraiser wins a prize.

If you have questions, e-mail: mathfund@gmail.com

The Somerville Mathematics Fund is an all-volunteer organization, which runs on donations and folks donating their time.  For information check out our website.  Then feel free to volunteer or to donate.

The Somerville Mathematics Fund is pleased to announced that they have awarded five scholarships this year, thanks to the generosity of their wonderful donors.  The winners are such a delightful group of students who accomplished much while in high school are all planning on taking mathematics or mathematics-using courses in college.

The all-volunteer Somerville Mathematics Fund is an affiliate of Dollars for Scholars.  They offer renewable mathematics scholarships of $1,000 a year.

Three of the students received named scholarships.  Emily Mei received the Salvatore and Maria Pizzi Memorial Scholarship.  To read about the Pizzi couple whose family generously donated this scholarship go to  http://pizzifoundation.com.p9.hostingprod.com/

Rishab Sharma received the Charlotte and Dr. Irving Fradkin Scholarship.  You can read the story of Dr. Fradkin’s (and his wife Charlotte who worked behind the scenes to help make his dream possible) at http://scholarshipamerica.org/news_items/fradkin_history.php
Dr. Fradkin was the founder of Dollars for Scholars over 50 years ago and just this April retired from Scholarship America, the parent organization.

Djinnie Timoleon received the Alice Schafer Memorial Scholarship.  You can read the story of Alice Shafer at http://www-history.mcs.st-andrews.ac.uk/Obits2/Schafer_Boston.html
Alice Schafer overcame challenges in her own life to become a mathematician and a founder of the Association for Women in Mathematics in 1971 and was their second President.  She was a founding member of the Somerville Mathematics Fund board in 2000.

The Somerville Mathematics Fund, an affiliate of the national scholarship organization Dollars for Scholars, was chartered in 2000 to celebrate and encourage achievement in mathematics in the city of Somerville, Massachusetts. It May 2011, it was recognized as the outstanding Dollars for Scholars Chapter in New England.  Since it's founding, it has awarded $204,000 in mathematics scholarships to outstanding Somerville students.  Next fall, The Somerville Mathematics Fund will be seeking applications from teachers who teach in the city of Somerville who would like funding for classroom mathematics activities.  In October, the Math Fund will also be seeking high school students to compete in the ninth annual Scrapheap Showdown.  For more  information, to volunteer, or to make a tax-deductible contribution, please contact Erica Voolich (617-666-0666 or mathfund@gmail.com) or go to www.somervillemathematicsfund.org.

Starting with Pizza, Ending with Pie and Celebrating Pi in the Middle! 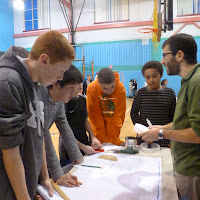 Take a bunch of middle school kids, their teachers, parents and some volunteers add a good bit of math, some food, and what do you get?  A π Night Celebration! 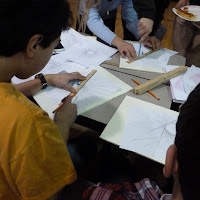 On Thursday night, 3.14, over three hundred students, parents, teachers, and volunteers celebrated π  by eating pizza for dinner, then spending an evening estimating, creating, collecting data, answering questions, and ended with pies for everyone and π pencils for the students.

After enjoying pizza donated by the Bickoff family, the students from Kennedy, Healey, West Somerville and Argenziano schools went around to a wide variety of math activities set up in the gym and cafeteria.  These activities included: bicycle wheel roll, guessing contest, tooth pick drop (Buffon Needle problem), drawing a circle the size of a CD, mystery boxes, π button design, π facts quiz, birthday in π, circle in square vs square in circle, drawing cardiod or nephroid, drawing concentric circles by folding, drawing circles by tangents, drawing circle by right angles, reciting digits of π, predicting how high of a pour, predicting circumferences and radii, graphing circumference vs diameter. 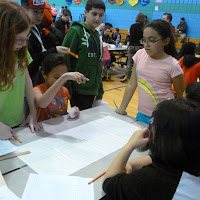 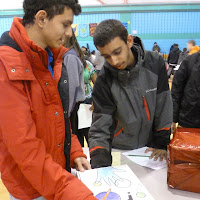 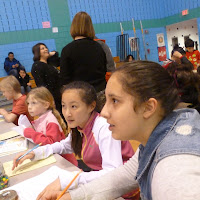 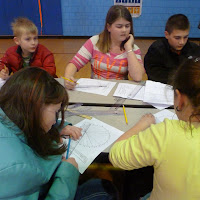 This Pi Night celebration was sponsored by Somerville Mathematics Fund, an affiliate of the national scholarship organization Dollars for Scholars.  They were founded in 2000 with the mission to celebrate and encourage mathematics achievement in Somerville MA.  In April they will be looking for applications for college mathematics scholarships.  For more information, www.somervillemathematicsfund.org or mathfund@gmail.com. 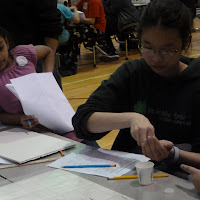 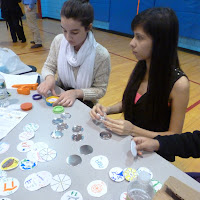 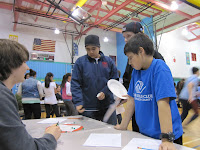 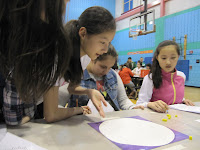 © 2013 Somerville Mathematics Fund, Erica Dakin Voolich
The link to this post is http://somervillemathematics.blogspot.com/2013/03/starting-with-pizza-ending-with-pie-and.html
Posted by Erica at 1:52 PM No comments:

In early April, the fund will be seeking applications from students who reside in Somerville for college mathematics scholarships.  Copies of the scholarship application form is available at  www.somervillemathematicsfund.org   For more information, to volunteer or to make a tax-deductible contribution, please contact Erica Voolich (666-0666 or mathfund@gmail.com).

©2013 Erica Dakin Voolich
The link for this page is http://somervillemathematics.blogspot.com/2013/02/the-somerville-mathematics-fund.html

Each year The Somerville Mathematics Fund awards grants for teachers in Somerville MA who have great ideas for math activities in their classroom, for after school activities, or at a family math night.  The grants are for materials and are for up to $500 each.  Teachers who have won before are eligible to apply again as long as they have completed the follow-up paperwork for their previous grant.

The deadline is coming soon, 14 January 2013.  So, I you have a great idea but don't have the money for materials in your classroom, go to our website and download the application.
Posted by Erica at 9:56 AM 1 comment: