On October 28, 27 high school students on 9 teams gathered in “The Cage” in Cousens Gym at Tufts University to compete in the Somerville Mathematics Fund's 13th annual Scrapheap Showdown.  Instead of just the usual interesting “junk” in the center of the room when the students walked in, there were also piles of foam core.  The students were given their challenge: to design and build a catapult on a base of  homasote  board. The teams worked intensely, designing, building, testing, reinforcing, and adjusting their catapults.
Time was called after 3 hours.  Now was the time for the three competitions. The first challenge was to fling a marble contained in a balloon the farthest distance.
Each team had three tries and their longest trial was counted.  The second challenge was “bowling” — throwing for accuracy as many marbles (in balloons) as possible in two minutes at empty water bottles lined up on a table.  This proved the most difficult challenge of the afternoon. 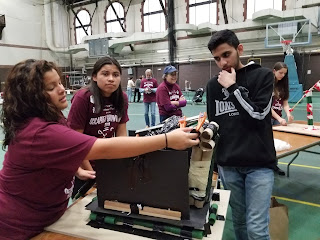 The third challenge was the craziest.  All the teams were at their own table in a circle around a kid’s swimming pool with a bucket in it.  Each team had 10 pingpong balls.  They all shot towards the pool at the same time.  Lots of pingpong balls bouncing all over!  There were points for landing in the pool, with a bonus for landing in the bucket.

Teams were ranked in each event, one thru nine, with 1 getting 1 point, etc.  So the winning team had the lowest final score.
The team with the lowest overall score, was “i i on the pi pi” [“eyes” on the pi’s”] (Brian Jian Chan, Luca Duclos-Orsello, Timothy Labounko). 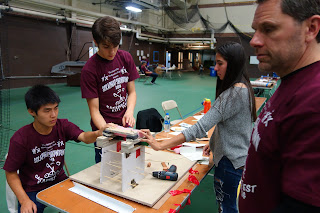 This event was for both fundraising and an intellectual challenge--all funds raised go towards a Somerville Mathematics Fund scholarship for an outstanding Somerville mathematics student.  The winning fundraiser was Nikhilesh Rattan who took home a RedBones BBQ gift card. 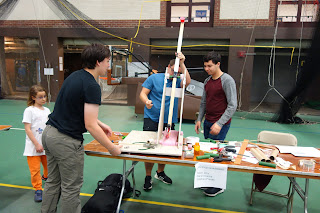 Stanhope Framers donated the foam core; and Somerville Home Depot, the homasote.  Michael Morgan and Patricia Murphy-Sheehy, teachers at Somerville High School, recruited student teams.  Michael Voolich designed the T-shirts with the icon use donated by Icons8.com and Yongkang Yu designed the poster advertising the event at the high school. 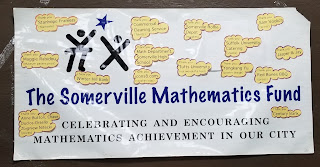 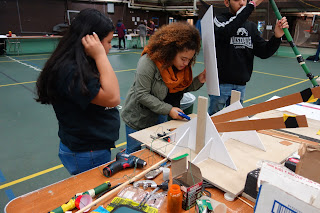 Suffolk University Catering provided the refreshments for the teams and volunteers.  Various members of the Board worked on all aspects of organizing the event and worked to make it a success along with community volunteers Clarissa Westney and Ben Perrin. 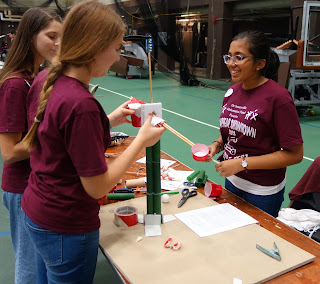 The link to this page is https://somervillemathematics.blogspot.com/2018/10/scrapheap-showdown-catapult-fest-fall.html
©Erica Dakin Voolich 2018