Kennedy School sixth grader John Kalageropoulos and volunteer Alanna Connors record data on the circumference and the diameter of an object at one of more than a dozen stations set up in the school’s gym on Pi Night. Sponsored by the Somerville Mathematics Fund, these mathematical festivities occurred on March 12 in anticipation of the date that matches the first three digits of “pi.” 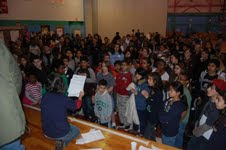 Pi Night participants and volunteers listen as winners are announced at the end of an evening of games and activities celebrating the concept of “pi.” Thirty full-sized Table Talk pies were given as prizes at this event, which took place on March 12, the last weeknight before the date “3-14.” 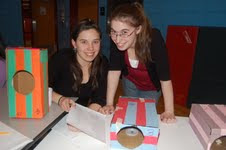 Somerville High School juniors Samantha Dudley and Kathryn Long help out at Pi Night at the Kennedy School on March 12. Students who visited the “Mystery Box” table tried to guess the circumference of various jar lids without being able to see them. Nearly 40 SHS students volunteered for this middle-school math event, sponsored by the Somerville Math Fund.